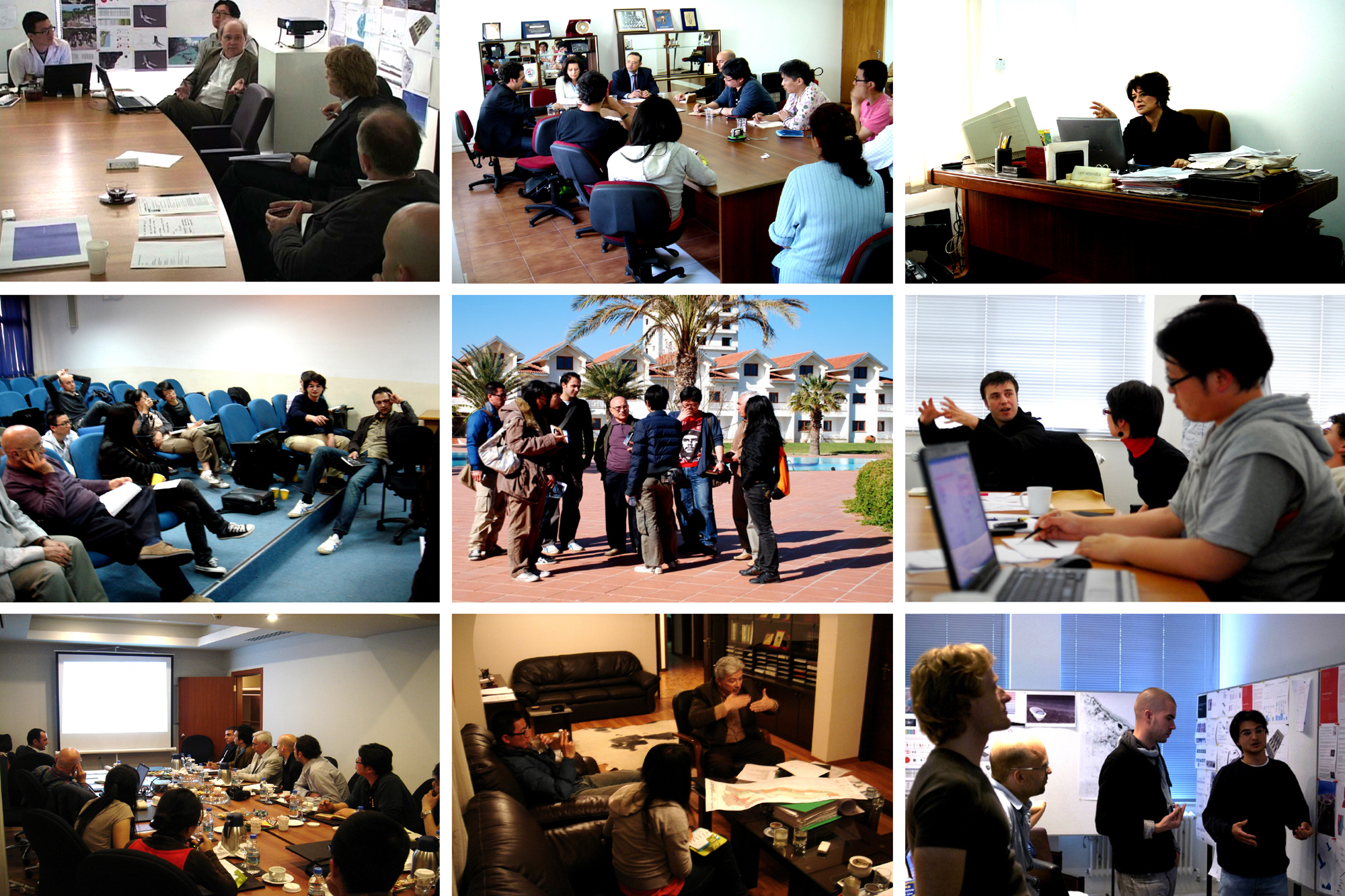 “Instead of a science of objects and a politics of subjects, we should have at our disposal a political ecology of collectives consisting of humans and nonhumans.” 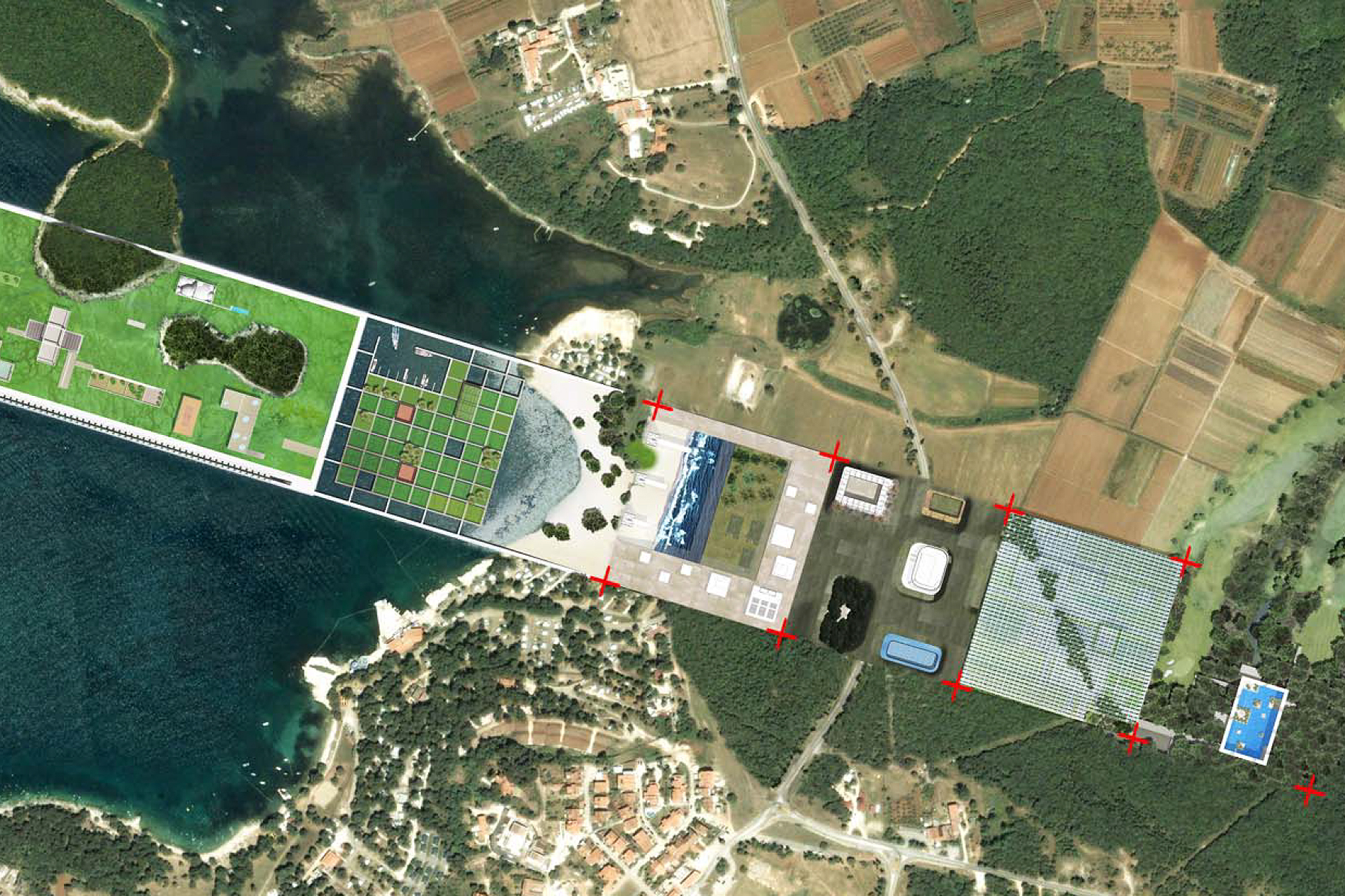 Environments of Collectivity is an academic research project that was an initiated and conducted by Olaf Gipser within the postgraduate program of The Berlage Institute, Rotterdam, and The Berlage, TU Delft, throughout the years 2008-13. As collaborative study it had involved faculty members, students, and external partners such as municipal and governmental agencies, research platforms, commercial parties, and individual experts.

Environments of Collectivity investigated a tradition of architecture that articulates forms of collectivity through the embedment of social practices in spaces of intensified and manipulated environmental resources.

In its initial stage, the research focused on the architecture of the mass tourism resort, a building type for a long time ignored by the discipline of architecture despite its accelerating global success. The tourism resort treats indoor and outdoor environments with equal manipulative zeal and presents architecture not as the design of objects but of environments; not as design of space but of atmosphere. It constitutes a thoroughly material realm that surpasses the picturesque gardening of landscape to include and program the environment’s various flows of matter: geological substance, water and humidity, temperature, wind, light, etc. The experience of this profound physicality by the design of effects, narratives, and scenographies determines the resort’s spatial layout and is its primary reason for existence. 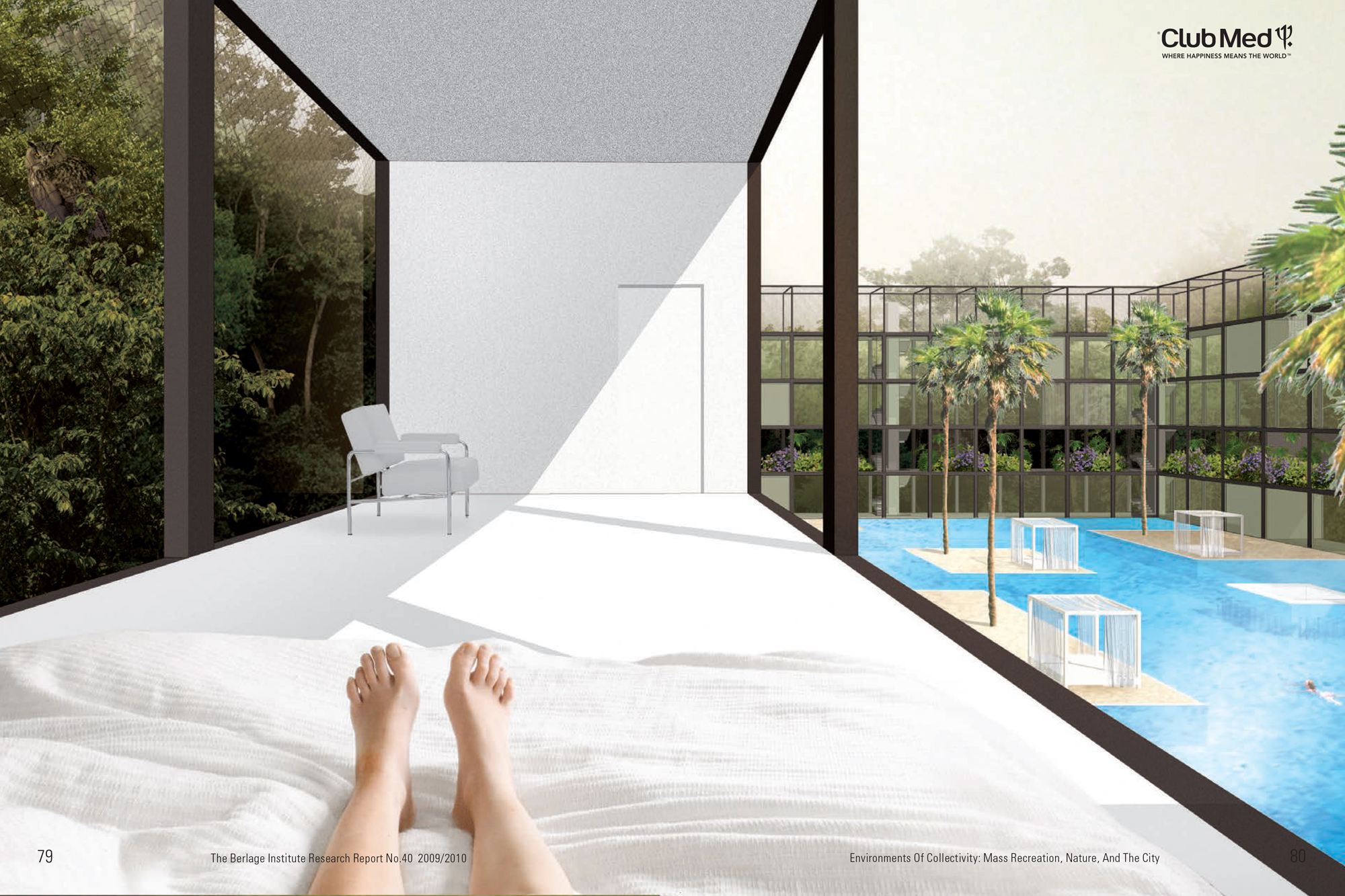 All-inclusive resort tourism may well be the paradigm lifestyle for the 21st century mundane: a place of temporary dwelling for an increasingly kinetic and selective society that accommodates the two dominant social tendencies of contemporary Western societies – the individualized self and its part-time embedment in multiple like-minded lifestyle communities. The all-inclusive resort allows for experiencing both as profound interiorities, assisted by an omnipresent infrastructure of services; being-taken-care-of as liberation from the basic redundancies of self-maintenance and facilitation for celebrating explicit hedonism. The construction of such ingenious realm of paradoxical collectivity is crafted by particular architectural techniques of separation and mediation. 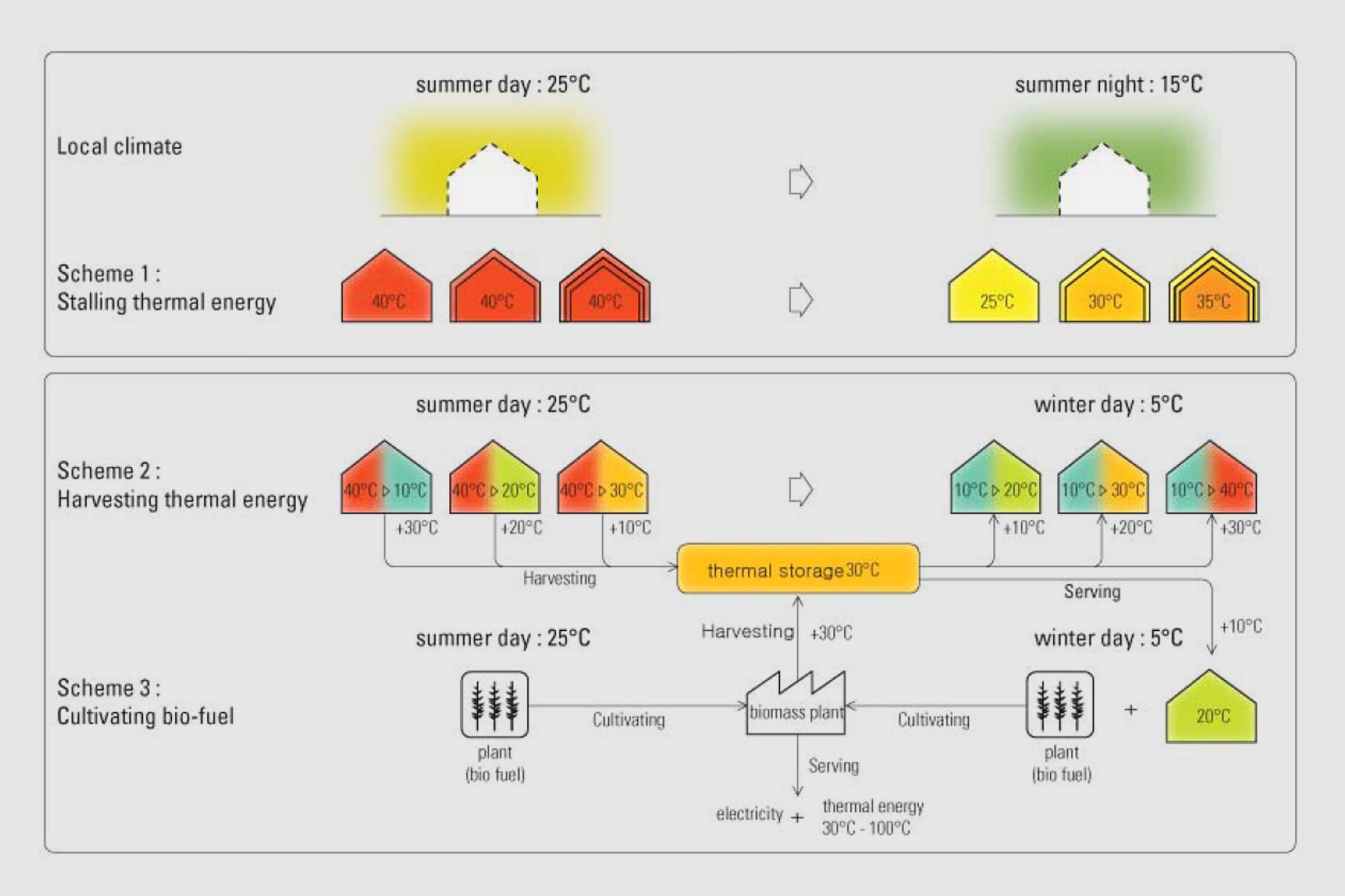 The second stage of the research addressed the relationship between mass recreation, nature, and the city. The holiday resort has been the architectural prototype for the industrial production of mass recreation. Like the Fordist factory, it is built on Taylorist principles of industrial spatial organization. If the factory was located in and driving the industrial city, then the resort has been opposing the city as remote urban outpost re-activating the myth of nature; lending a spatial and territorial dimension to the concept of holiday as the state of exception from everyday work and life. Anticipating the further decline of those constitutive oppositions the tourism resort has been built upon (city/ nature, work/ free time, mind/ body), thus anticipating that leisure and recreation will become ever more relevant in our urban life, how to rethink mass recreation as a problem of the Post-Fordist city? 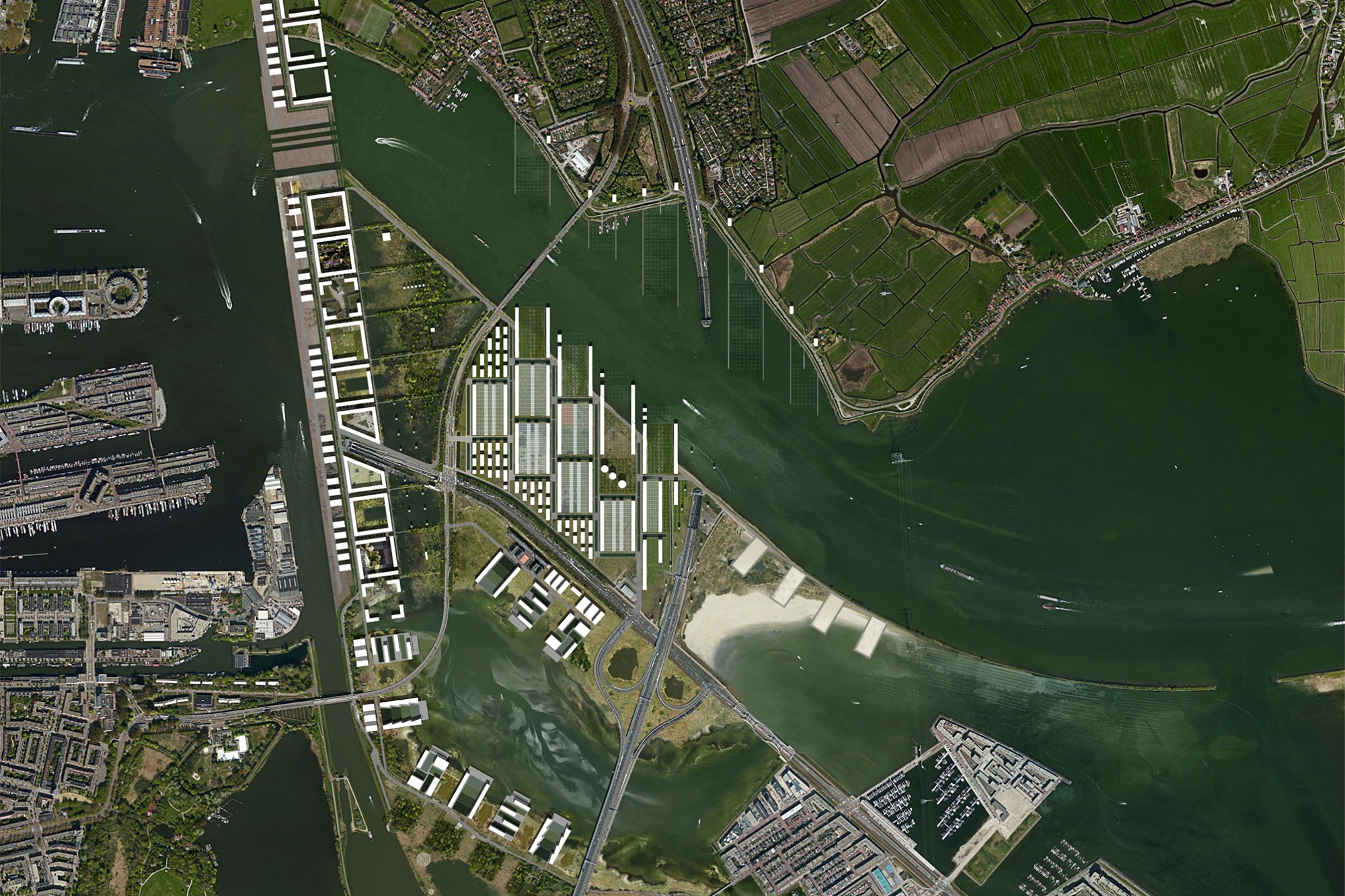 The third stage of the research focused on the ‘ecological modernization’ of the contemporary city and three of its socio-environmental key challenges: resource management, climate change, and biological and cultural diversity. Three working hypotheses generated speculative design work:

(1) The urban ecology of environmental production highlights the existential dimension that resource management will acquire for cities in near future. Artificial in their nature yet combining natural and cultural techniques, these sites and infrastructures of producing the urban biosphere are of great collective significance and as such destined to become important (social) institutions of the ecological city.

(2) The urban ecology of internal defense is addressing the city’s increasing struggle with good and bad forms of nature and the necessity to strategize its spatial organization accordingly. As such, concerns for environmental defense will play an increasing role and realign the ecological city with the history of urban defense.

(3) The urban ecology of co-existing biotopes is a high-density environment maximizing the spatio-temporal accommodation of human and non-human populations. The co-existence of both types of populations produces their respective habitats, potentially conflicting modes of interrelation, and will reinforce the political dimension of urban space in the ecological city. 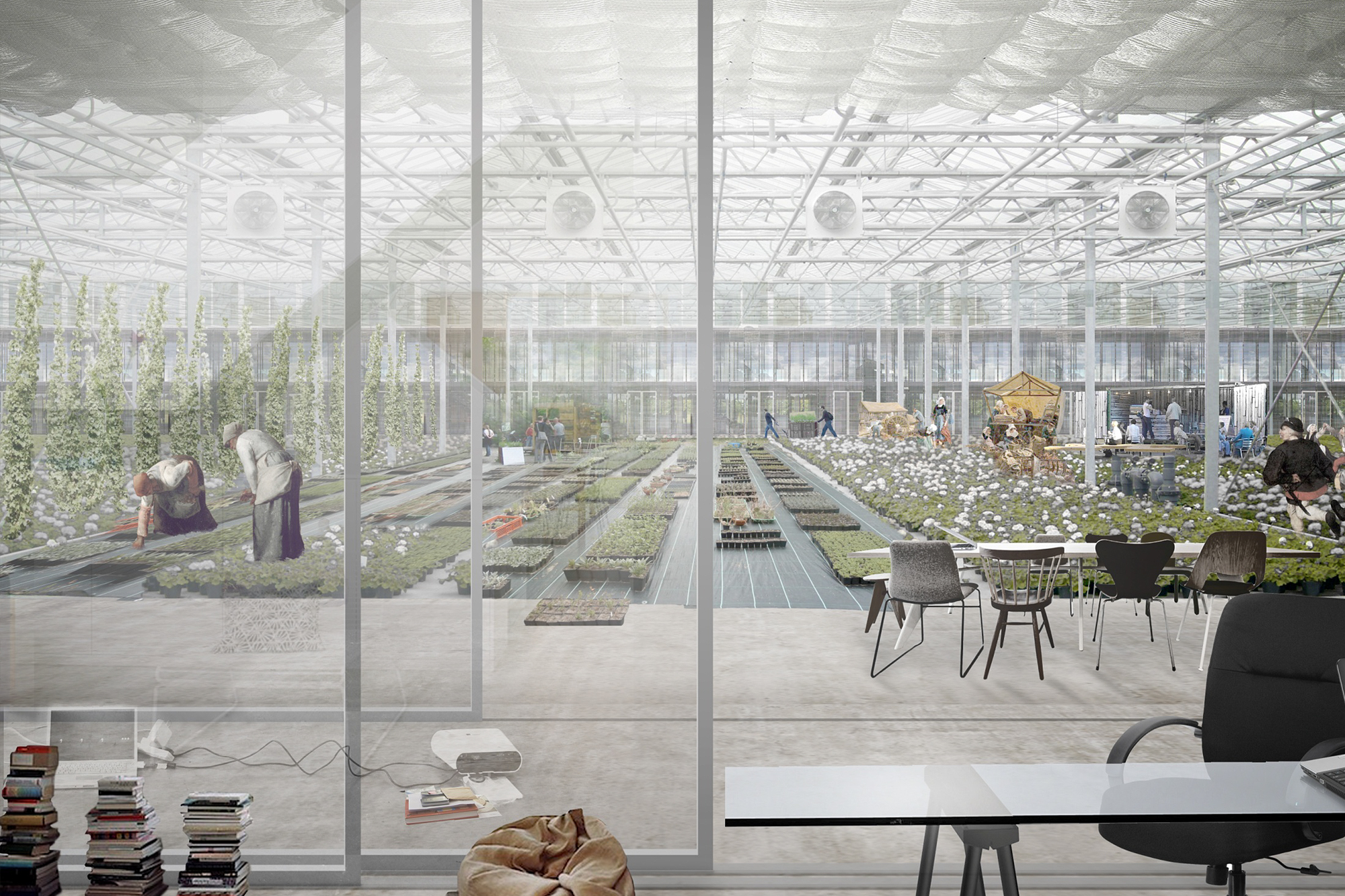